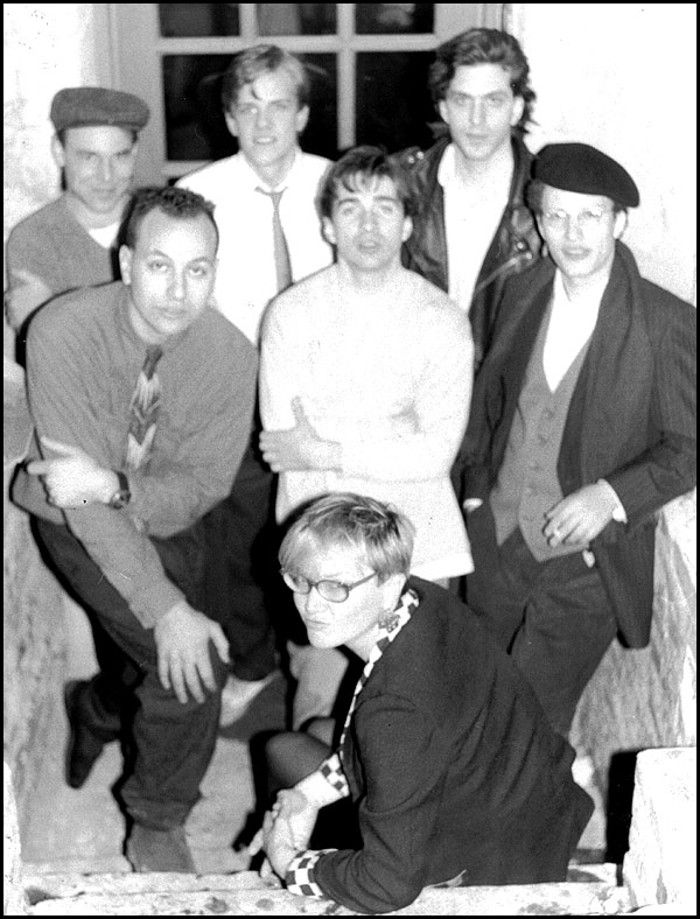 Founded by Bosco in 1987, the Flophaus Society Orchestra was around for many years with several different lineups. The band played a variety of venues from Odeon Cafe in NYC to splashing in the Atlantic Ocean following the Mermaid Parade in Coney Island. They played songs by King Oliver, Kid Ory, Louis Armstrong and other Foundation Jazz standards.

The following are rough mixes from cassette of the infamous long lost Flophaus Society Orchestra recordings from 1987. It was sent in by a French Foreign Legion buddy of Bosco; Pierre LaFoote. Given to him when Bosco was living in Martinique.

“That band was so fun to play with. We had a few gigs at this spot in NYC called the Odeon. It was a music industry hangout and there were a lot of celebrities about. One gig there was a table right up front where Gene Simmons from Kiss was sitting and eating with some friends. Bosco’s trumpet was literally feet from his face. Simmons got up in the middle of eating and left in a huff. The whole band was laughing. Jean-Michel Basquiat was leaning over the piano and laughing all the time we played. Beastie Boys and their crew were there along with Mick Jones from The Clash and B.A.D. hanging out with Jim Jarmush the film director. We all went outside and smoked hash joints between sets. At another club, we were in the middle of a song and out came Adam Yauch as his alter ego Nathaniel Hörnblowér. He was in a fat suit and he jumped head first into the large tightly packed crowd and began to crowd surf as they passed him all around and back onto the stage as we rocked Muskrat Ramble by Kid Ory.”
– Paul Starkey

A later lineup (above photo) with a couple of tunes recorded by them: